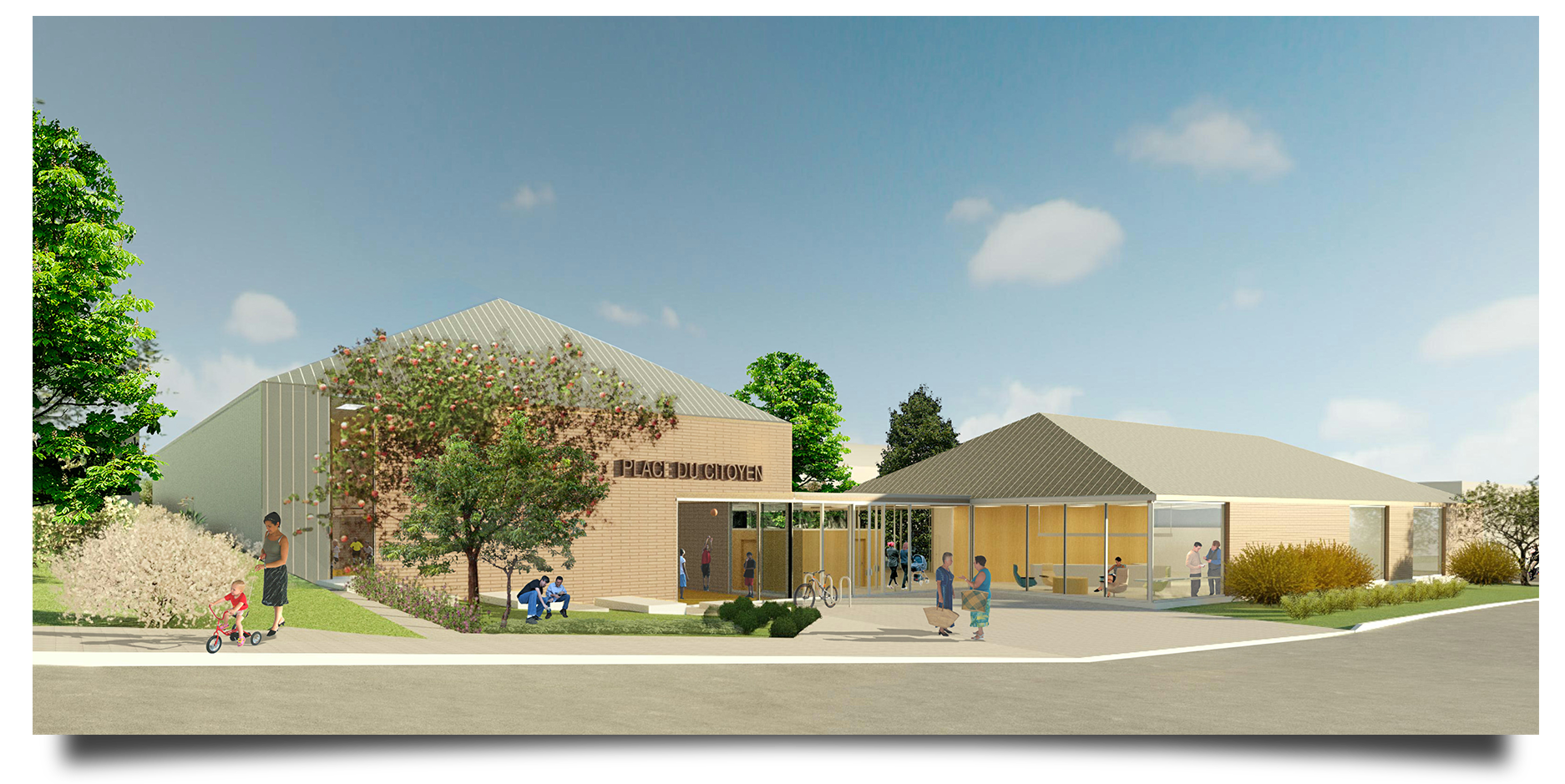 Integration of the City needs:

At the public presentation, of July 2nd, most participants (more than 70) preferred version D. Members of the municipal Council also opted for the same option.

Option D includes a library, a gymnasium, three multi-purpose halls that can be combined to create an auditorium with 150 to 200 seats and all the technical features allowing to build a Childcare center. 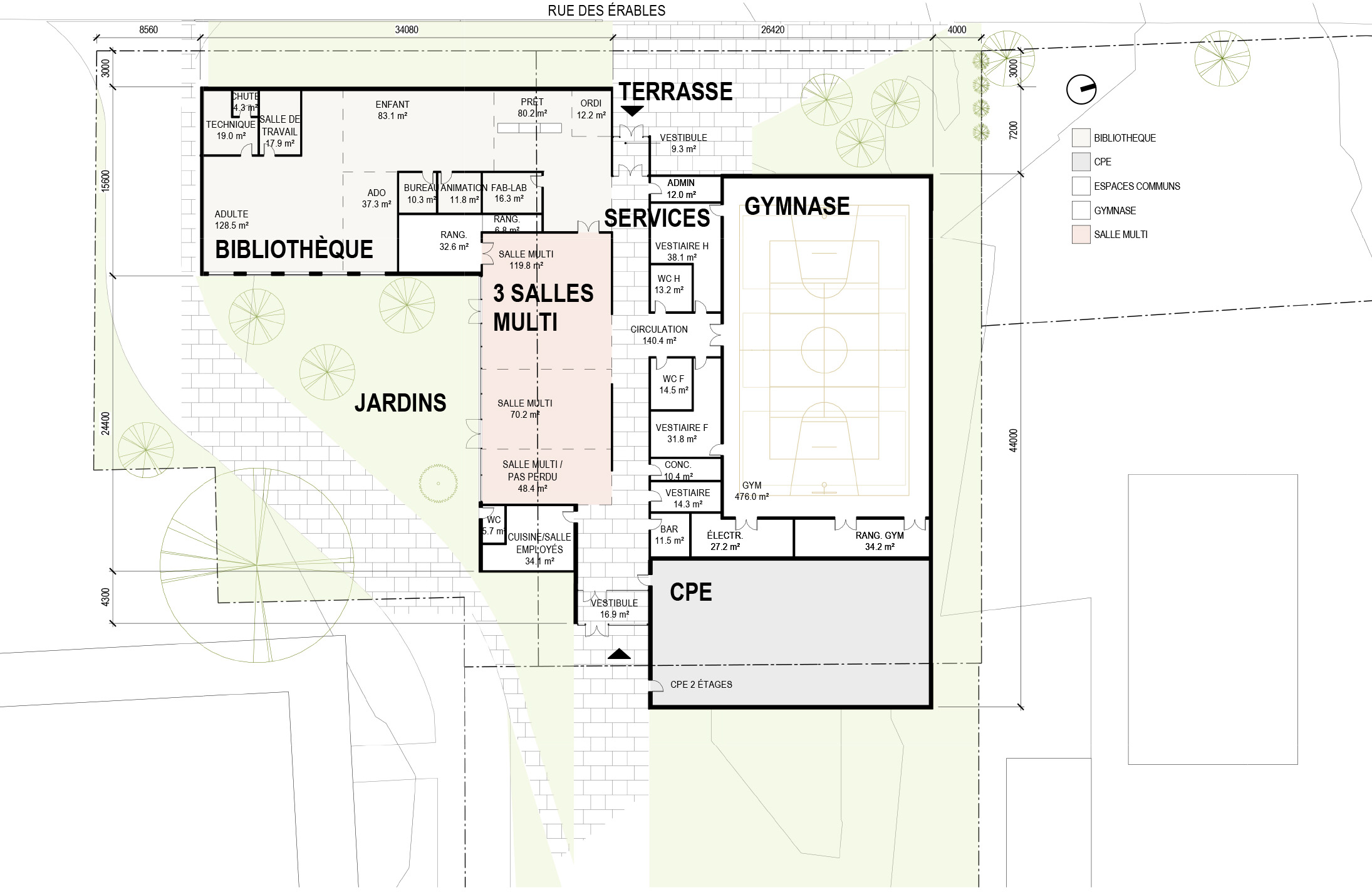 The interior of the building

The 2.0 library offers more space and work areas. Through natural light, it includes sections for children, teenagers and adults.

The three multifunction halls are soundproofed by acoustic panels. These portable partitions can be moved to create one, two or three halls. As one hall, it can accommodate 150 people sitting or 200 standing. Panels can be deployed to hide the light from the large windows on the south side during a show.

Multifunctional halls also open onto an outdoor garden without the need to go up or down a step. The size of the gymnasium complies with municipal standards allowing multiple sport activities. 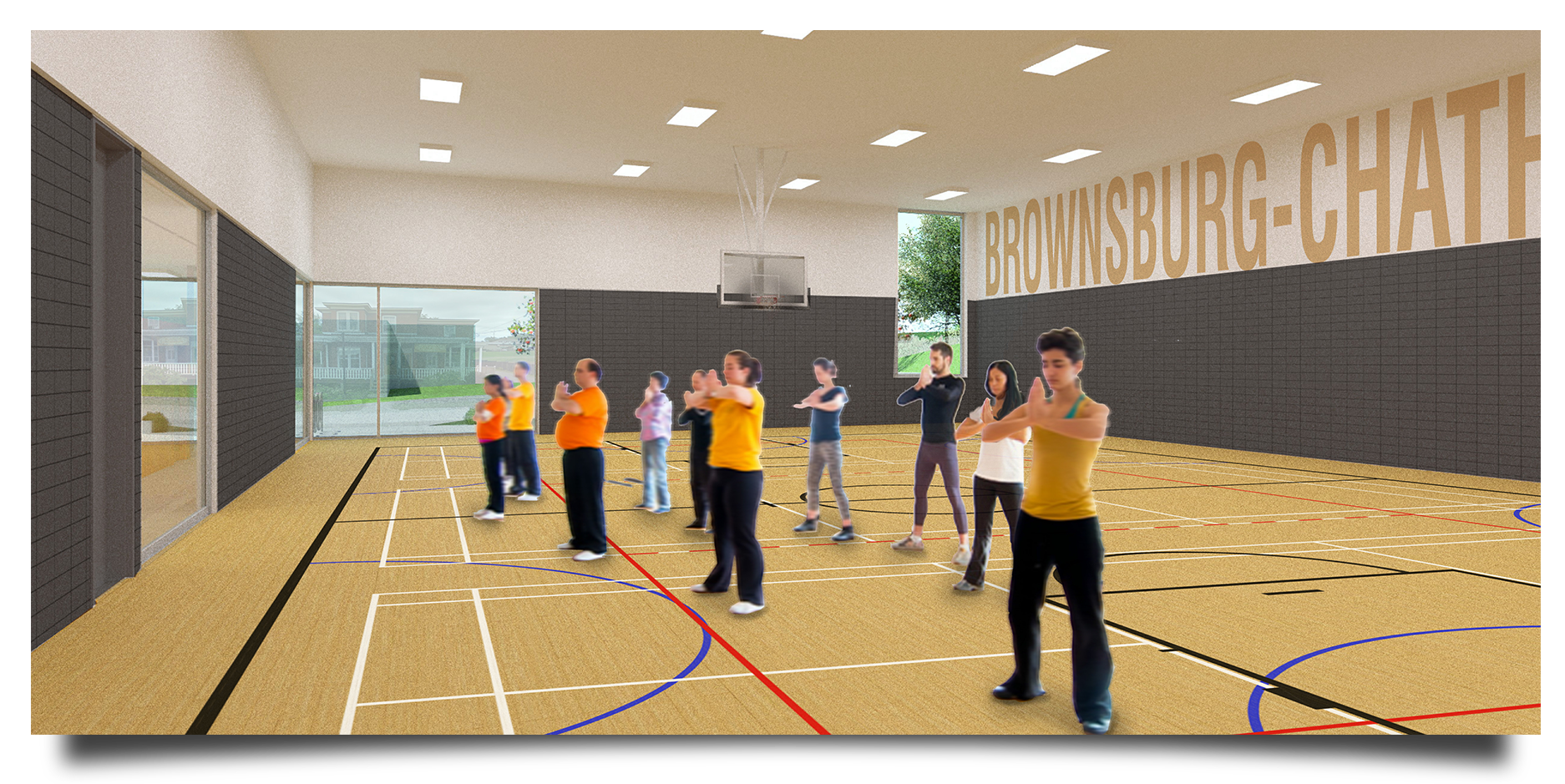 In D version, all common areas are designed to be shared between the different modules. As such, the kitchen and employee room could be used by library staff and future Childcare centre workers. Washrooms will be available for users of the multifunction halls, gymnasium and library. The same applies to the janitorial and the cloakroom located at the entrance.

The location chosen is at the corner of Les Érables and Principale streets. The Place du citoyen and the arena will share the parking lot (additional spaces will be added). 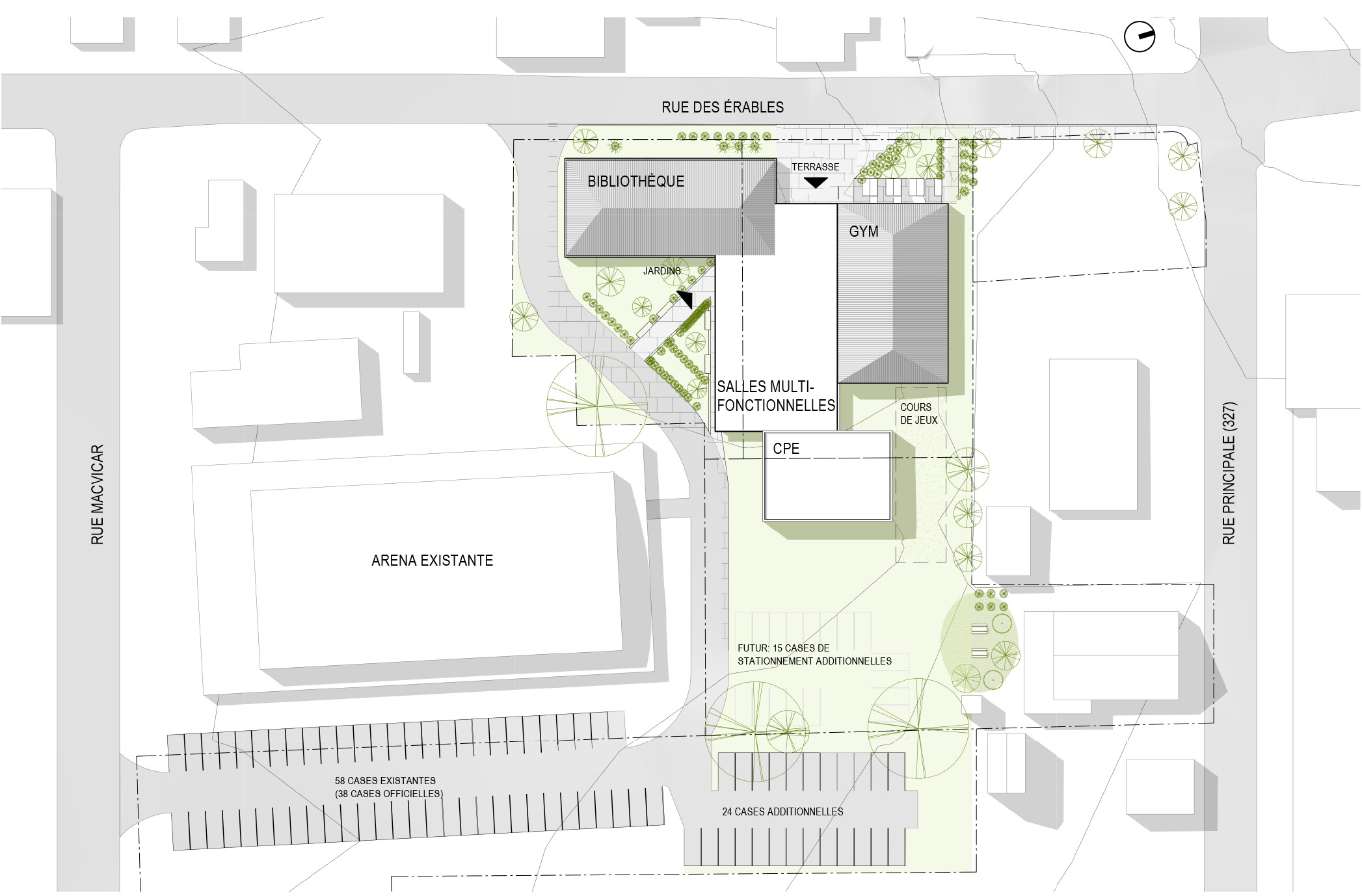 Questions were asked to people attending the project’s presentation on July 2nd . The results of these questions are as follows:

Question 1 : I appreciate Brownsburg-Chatham for…

Question 2 : I consider the revitalization of downtown Brownsburg-Chatham to be…

Question 3 : As a continuation of the project, I consider that the possible construction of a Childcare centre for Brownsburg-Chatham would be…

I consider having access to a multifunction room (Meeting rooms, shows, symposia, etc.) for the residents of Brownsburg-Chatham to be…

Question 5 : To be able to improve the project (multifunction hall and possible option to add a Childcare centre), a cost difference not exceeding 10% seems reasonable…

Question 6 : Which option is the most appropriate to make Place du citoyen a gathering place that meets the needs of the community?

What will be the cost of place du citoyen?

Four projects were submitted and the city council opted for the most spacious version (option D on the drawings). Two thirds of the project are funded by the two levels of government (federal and provincial). The city’s final bill will be $2.24 million.

Because it’s ideal. Government grants are available now, and that’s not always going to be the case. This is a once-in-a-generation chance.

For example, if you were offered a $200,000 home and the government paid two thirds of it, $132,000, you would just have to pay the remaining $68,000 and it would be completely yours – Are you refusing or accepting this opportunity?

What are the annual operating costs?

The Place du citoyen’s gross operating costs are estimated at $140,000 annually. The breakdown is as follows:

But great news! We will be saving money since the library will be relocated.

This amount will be covered by a realignment of the City’s budget with no impact to taxpayers.

What will be the impact on my tax account?

However, based on concrete examples from other cities, it is estimated that the value of the buildings surrounding Place du citoyen will increase. Thus, six years after the project is completed, the new revenues are expected to absorb the costs of the building.

Ultimately, the citizens’ tax bill should be frozen or even reduced.

What will be the impact on the city’s debt load?

There is no impact on the City of Brownsburg-Chatham’s debt load. Better yet, the rate will only go down. The forecasts are as follows: (the City is required to complete a five-year plan)

What will be the FabLab of our library?

In the context of this project, the Fab lab concept refers to a service that can initiate and assist citizens in information technologies. Very small and user-friendly, such as, for example, the use of a small (under $600) computer-controlled 3D printer for the design and production of objects.

The Fab lab is an essential tool to counter school dropout among our young fellow citizens.  Also, most of new libraries in Quebec now have a Fab lab.

In a 16 m2 computer room, this is an educational service related to the “Library 2.0”. In addition to refresher training for library staff, this service will not result in any new spending on high-tech equipment. The Brownsburg-Chatham Fab lab will be modest and could be improved over time.

Due to the State of Health Emergency caused by COVID-19, the government issued ministerial decree number 2020-033 on May 7, 2020. The decree provides for adaptations to the usual procedure for registering people qualified to vote (the register) in order to prevent the movement and the gathering of citizens. Thus, the register must be held for 15 days and must be kept at a distance (not at City Hall). Therefore, written oppositions must be sent to the City. The procedures for transmitting referendum ballot requests are mentioned in the public notice available on the City’s website at brownsburgchatham.ca.

Why not hold a referendum on the place du citoyen?

That’s how it works in a municipal democracy, and it’s governed by the Municipal Elections and Referendums Act. All the measures are in place to ensure that democracy is exercised. There were public consultations and presentations. The figures, presentation and results of the last consultation are available (in this web section, for example). Citizens who wish to express their opinion may sign the register to signify their opposition.

Finally, the cost of a referendum is approximately $66,000 (costs of the 2017 municipal election). That is 3% of the cost of the Place du citoyen project. If the number of people who oppose the project (through the registry) is greater than 772, the city council can either 1) abandon the project, 2) propose a new project or 3) carry out a referendum.

Why does the city borrow $5,8M since the building is subsidized by two thirds?

The city simply must pay for the construction costs, since the grants from both levels of government will be allocated on the delivery date of the project.

Why adopt the by-law now?

The main grant was obtained five years ago. In January and May 2020 (despite the appearance of COVID-19), government authorities confirmed that no extension would be granted for the project. The construction of the Place du citoyen must therefore be completed by the end of September 2022. If payments are not made in 2021 and 2022, the money earmarked for Brownsburg-Chatham will be transferred to another City to build a similar project.

To meet the timelines accordingly, the next steps of the project must be undertaken before the end of the summer and the call for tenders must be launched before the winter.

Do we really need a Place du citoyen?

Every city in the Province of Quebec has similar facilities. It is a service for the people. Saint-Hippolyte, Boisbriand, Sainte-Agathe— For example, Mirabel has 7 libraries and 6 cultural centres for 50,000 residents. That is an average of 8,600 residents per cultural centre.

The proverb says, “When you don’t move forward, you move backwards”, and the evidence is cruel. Between 2011 and 2016, the town of Brownsburg-Chatham saw its population decline by 1,2%. Investments are needed to encourage families to settle. The need is urgent.

Why do we invest money in an artistic work?

The policy of integrating the arts into the architecture and environment of government and public buildings and sites applies when the Government of Quebec provides a grant to a person, department or agency for a capital project. Consequently, 1% of the budget will be used to graft an artistic work in the Place du citoyen.

Brownsburg-Chatham, Tuesday, July 14, 2020 – At the the municipal council meeting of July 7th , the elected representatives adopted the loan by-law 285, giving the green light to the next stage of the realization of the project of the Place du citoyen. The building’s chosen option includes a version 2.0 library, a gymnasium, multifunction halls wich can be transformed into an auditorium with a capacity of 150 to 200 seats as well as a possible future Childcare centre. 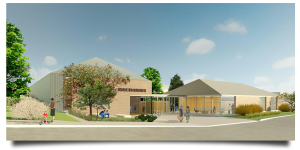 “I made a formal commitment in the 2017 municipal election, The Place du citoyen is the cornerstone of the City’s strategy to revitalize downtown Brownsburg-Chatham,” said Mayor Catherine Trickey. “We want to make the downtown core more attractive to families, businesses, newcomers and the general population. With this smart investment, we are confident that our downtown will once again become the epicentre of Brownsburg-Chatham’s economic and social life. A promising visionary project of wealth.”

With $4 million in government grants, the impact on the tax bill will be minimal. For an average house of $200,000, there will be an increase of $17,08 in 2022 and an increase of $12,11 in 2023. So, starting in 2024, the cumulative total impact will be $0,56 per week or $0,08 per day. However, based on concrete examples from other cities, it is estimated that the value of the buildings surrounding the Place du citoyen and throughout the territory will increase.

“The increase in the value of buildings will ensure an increase in the tax base and eventually will cause a freeze, or possibly, property tax cuts for everyone,” according to Trickey. “The equation is simple: invest now to create wealth tomorrow.”

The cost of operating this energy-efficient building is estimated by the consortium of engineers and architects (CIMA+, Pierre Morency & 2X4) at $140,000 annually. From this amount, we must deduct the rental revenues from the multifunction halls and gymnasium as well as the savings generated by the relocation of the library. The net cost of operating Place du citoyen is estimated at $83,775. This amount will be covered by a realignment of the City’s budgets and will have no impact on taxpayers. 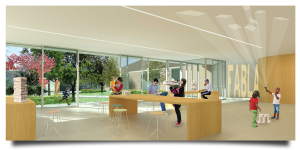 The name “Place du citoyen” is provisional since the City of Brownsburg-Chatham will conduct a contest among the population to find a representative name, approved by the citizens.

Located in the Laurentians, the town of Brownsburg-Chatham is in the heart of the MRC d’Argenteuil and has a population of over 7,000. It is well-known for its camping and marina on the Ottawa River.

CIMA+ is a private, multidisciplinary company that provides consulting engineering, project management, environmental, and geomatics services. It offers engineering services in building, energy, industry, municipal infrastructure, communication systems, and transportation. CIMA+ was founded in 1990 by mergers and acquisitions of companies with nearly 30 years of expertise, and is now present in 40 offices from the Atlantic to the Pacific and on the African continent. CIMA+ has more than 1,800 employees, about 60% of whom own shares in the company.

The alliance between Pierre Morency architect and 2×4 allows to leverage the expertise of each company. Pierre Morency architect brings the knowledge and experience accumulated as project manager for more than 30 years. 2×4, a young firm, puts forward energy, rigour and the vision of a responsible and sustainable architecture, with a specific concern for environmental issues. Having developed a synergy of work in the past, the consortium specializes in state-of-the-art facilities for libraries, Childcare centre and municipal buildings.

A Fab Lab (contraction of the English fabrication laboratory) is a place open to the public where all kinds of tools are available, including computer-controlled machine tools, for the design and realization of objects.

People who wish to express their opposition to the project can do so by signing the register. All the details are in this PDF document (french).